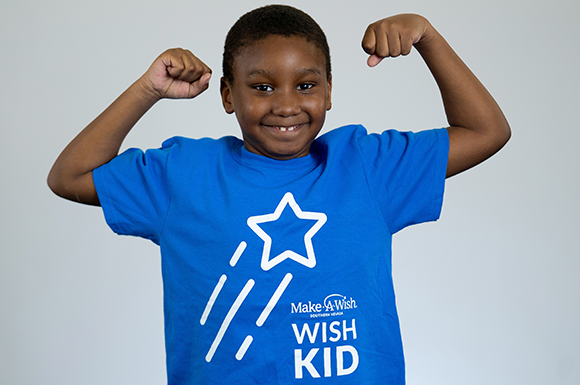 “I wish to have a shopping spree.”- Kashus, 6, heart condition

Every morning six-year-old Kashus wakes up and selects his favorite toy of the day. His battle with his heart condition may come with physical drawbacks, but his imagination is limitless. Each day is another opportunity to use his toys in new adventures that become even more special when his siblings join.

Kashus knew that wishing for a shopping spree would guarantee more fun and meaningful moments with the ones he loves most. His wish day started with a luxurious limo ride to his first store of the day, Target. With his brother and sister by his side, Kashus explored the toy aisles and set his eyes upon his favorite toy of the day, a Mack Hauler toy truck from Disney Pixar’s Cars. He jumped with glee, knowing that it was his. He then visited GameStop to purchase some video games and ended his day by picking up take-out at Olive Garden. Kashus’ wish was more than just a chance to add to his toy collection. It gave him renewed energy after all he’s endured with his condition. It gave him the ability to experience life beyond illness.

As a child with a critical illness, many aspects of Kashus’ life must be controlled, but his wish gave him freedom and strength when he needed it most. He reveled in having a day where he called the shots and could choose anything he wanted. Today, Kashus is enjoying his new television, toys, and video games; but most importantly, he’s spending lots of time laughing, playing with his siblings, and feeling the joy his wish gave him.